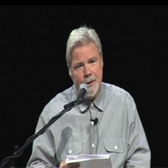 Poet Robert Cording reads from his work on the stage of the Historic Asolo at the John and Mabel Ringling Museum of Art in Sarasota. He shared the stage the evening of January 6, 2011 with writer and pianist Lisa Weiss and composer Laura Kaminsky. It was a magical evening and Bob’s poem, 1964 gives you a good idea why.

One thought on “A Poem from Robert Cording”