Of the thirteen Hermitage Greenfield Prize winners, six of the commissions address issues of social justice.

• Sanford Biggers (2010) reconfigured quilts from the underground railroad addressing slavery and its lingering injustice. Exhibited at the Ringing Museum.

• Vijay Iyer (2012) addressed Trayvon Martin’s killing in a wind quintet with words of the Florida “Stand Your Ground” law incorporated into the piece. Performed at the Sarasota Opera House in collaboration with La Musica.

• Trenton Doyle Hancock (2013) created metaphors for good and evil in his autobiographical representations relating to his life as an artist and an African-American man in contemporary society. Exhibited at the Ringling Museum.

• Helga Davis (2019) is addressing interracial understanding in her music performance piece to be presented in collaboration with EnsembleNewSRQ in 2022.

• Jennifer Packer (2020) will address the lost black communities of Florida and lost black identity in her 2022 work to be exhibited at the Ringling Museum.

• Aleshea Harris (2021) is creating a theatrical piece inspired by the stories of two men of different eras who suffered a similar kind of violence — one at the hands of the American justice system and the other at the hands of an organization that displayed him like an animal in a zoo. Presented in partnership with Asolo Rep in 2023.

In addition, a number of Hermitage Fellows over the years have raised their voices, their brushes and pens to shine light on matters of equality and justice.

As an organization and as a community of artists, we at the Hermitage vow to hold ourselves to the highest standards in combatting racism. There is no place for hate – in art or in life. We are deeply committed to diversity, equity, and inclusion, and we proudly support our Hermitage Fellows who engage in social justice reform and the
stories that matter. 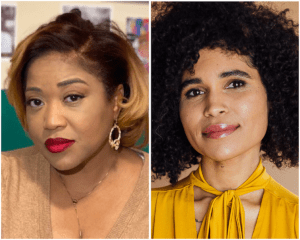